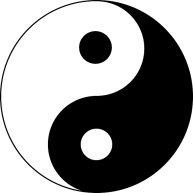 There are many change management approaches out there. Most focus on weaknesses you need to change; several others out there focus more on things to keep the same and build upon. Most change agents then further target using one approach or another, perhaps based on context, or perhaps as a ‘goto’ tool (you know what they say about goto statements – don’t use them!).

My preference is to balance between these approaches, two I have found really useful are Appreciative Inquiry and the Power of Habit.

I have always tried to help people and organizations find their strengths and build on those. This is the basis of Appreciative Inquiry, something I learned by reading the Thin Book of Appreciative Inquiry.  I’m looking forward to reading more on this to be honest as I think it is undervalued as an approach (I almost said under-appreciated…). Being able to identify, really help others identify, the core strengths they have and harness those for the changes they want to see is really powerful.

Here’s an example of how you might use Appreciative Inquiry; have the leadership of an organization (preferably with a sprinkling of lower down in the totem pole) create a KrisMap of where they want to be, personifying what the future organization will become. Then have the people identify the strengths they can leverage towards the resulting characteristics and build action plans to achieve these.  Very powerful, and quite motivating since you are using core strengths. 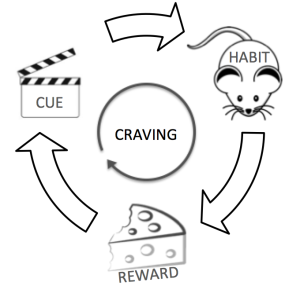 Yet only applying strengths does not help you eliminate weaknesses.  When talking about change such as what may occur in an Agile Transformation, another approach to look at is the Power of Habit. When habits work against where the organization’s people want to be, then one needs to look at changing the habit to a new one, while keeping the reward the same.

The Habit Loop can be defined as what cues a decision that needs to be made and once similar decisions are made repeatedly following the same formula that provide some form of benefit or pain avoidance (reward), then this will be the preferred decision routine; a craving gets established.  This is regardless of whether we’re talking individual, organizational, or societal. Keeping the reward the same, while changing the habit allows new habits to become more positively reinforced.  This can take some work and I always recommend breaking down the habit into a causal loop showing all the steps being taken.  This helps in identifying leverage points that you can use (strengths in Appreciative Inquiry speak) and possible side loops that could railroad the change; essentially risks to mitigate.

Lastly, remember introducing change, regardless of approach, can be overwhelming. Limit the number of changes you are introducing at any particular point in time.  This gives you a chance to better sense the effect the changes are making and respond accordingly.

For more information, see the latest version of my Taking Flight presentation.

Now that I’ve reposted a few older posts, I’ll give a new one…

One of the things I often get called upon to do is facilitate; meetings, workshops, retrospectives and other occasional agile ceremonies are all meetings I get called upon to facilitate.  I also find myself facilitating teams talking to one other (which actually goes into the encouragement to get together, not just the resulting meeting session) and sometimes what normally would be one-on-one sessions.

A few years back, I took one of the IC-Agile certified courses on Facilitation; they presented what they called the Facilitation Stance.  It’s useful.  (Because of possible IP ownership issues, I won’t present it here…) One thing that didn’t feel right was the treatment of maintaining neutrality as a facilitator; it wasn’t treated as core.  As I gave training to others on facilitation, they also seemed to question that lack of centrality.  Another area that I personally got, but others struggled with was the “stand in the storm”. So I began rethinking how to depict the concepts and came up with what I think is something easier to understand. 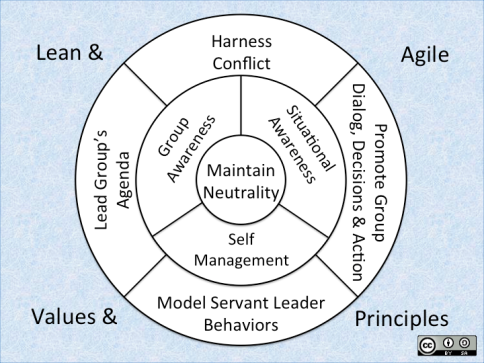 I call this the Facilitation Kernel.  It places Maintain Neutrality central to the entire concept.  This is important as if I am asked to render an opinion, where I am no longer a neutral party, the entire rest of the Kernel can be sacrificed.  This is particularly true if I am asked to give insight from experience or observations.  The Facilitation Stance doesn’t make this as explicit as I would like (though it does acknowledge it).

My personal feeling is that the ‘Stance’ over complicates itself with the internal “being” and external “doing” (of which maintaining neutrality is an external “doing”.  This may be just me, but I find neutrality at the core.  In the “doing” circle, I place Modeling Servant Leader Behaviors, Leading the Group’s Agenda, Promoting Dialog, Decisions, and Actions, and Harnessing Conflict. Let’s dissect these one by one:

Modeling Servant Leader behaviors is very important to exhibit as a facilitator; you are there for the team and to serve them.  You are not there to serve someone else or yourself.

In Promoting Dialog, Decisions, and Actions (which encompasses the Stance’s Upholding the Wisdom of the Group), you are gently nudging the group to a bias of action versus inaction and making assumptions explicit so that good decisions can be made.

And lastly by Harnessing Conflict you are doing more than simply “Standing in the Storm”, but are helping people through their differences to a positive outcome.

To do this, you need to maintain three states of “being”; self management (which IMHO encompasses self-awareness), group awareness, and situational awareness (this may be my aviation background talking to me). The alignment I have chosen in the model is important.  In order to Model Servant Leader Behaviors, I need to mostly manage myself; the situation and group awareness are far less important.  To Harness Conflict, I need to be able to be wary of where the group is currently (in terms of emotional state and energy) and the situation at hand (in terms of positions and opinions).

I places the Lean and Agile Values & Principles outside this Kernel as if I wasn’t facilitating in this realm, it may be replaced some other set.  I think this makes the Kernel fully aligned with what any general facilitator may provide.  I know I have found this useful when considering facilitating more generalized sessions such as Open Space (which I have had the opportunity to do twice) and various workshops.

What do you think? Is this congruent with your thinking on facilitation?