The topic of observing people working has caught my interest more ever since I attended the Problem Solving Leadership workshop run by Gerald (Jerry) Weinberg and Esther Derby. At this year’s Agile Coach Camp, I ran a session on this to learn more about what other coaches do to see humans at work as well as share areas I know had learned to start paying attention to…

Our first step was to identify behaviors we observe. Some of the more common ones showed up in our list: work artifacts, conflict, movement, body language, noise levels from people and the environment, and patterns of communication between members (who talks to who).  Others are a bit less common: when people take on leadership, where focus is, and what Jerry calls ‘Jiggling’, an interaction or event that gets a system to change in a meaningful direction from being stuck.

I then had a few people volunteer to observe and select what on the system they wanted to observe. The remainder of the people did an exercise I gave them. After, we debriefed what was observed. One person chose to watch people’s body language and with the exercise focused on when people had eye contact. The other chose to watch for who had control of the pen since it was the primary method for getting work done. Lastly, I chose to focus on who took leadership roles at what time.

This led to a discussion for understanding how one can observe communications in a meeting and get an idea for who dominates the discussion by drawing lines with who talks to whom and how much. Equal lines with everyone shows little domination while lots of of lines between just a few may show others being ignored. This continued with some discussion around Google’s Project Aristotle and the work of Alex ‘Sandy’ Pentland; here’s a really good paper measuring Face-to-Face communications.

As a follow on, I had the team do a cluster exercise I learned in PSL. I asked the people in the exercise stand next to those with which they most closely worked. This is a very revealing; I’ve done it in a few retrospectives and it can have a team self-reflect on whether they may be isolating others in their work system or if the connections may be wrong to do the work.

We closed by sharing what made observing work systems difficult and how we may be able to improve this important skill. Below is the photo of the flip chart we took about this… 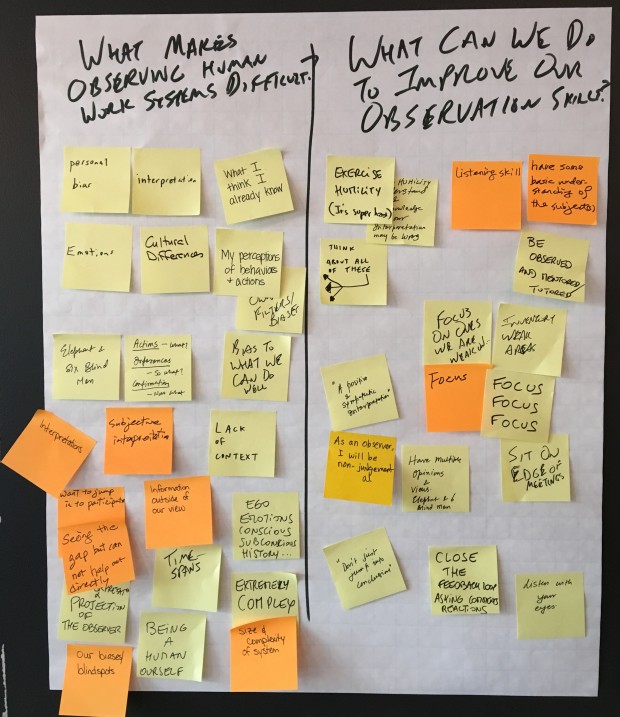 It was great seeing the variety of answers for improving our skills as coaches in this domain. Several mentions of humility were made as well as the core Scrum value of Focus. My favorite comment though was the metaphorical answer to “Listen with Your Eyes” and, of course another was one that hints at cognitive empathy, “have multiple views” to remind us of the Elephant and the Blind Men.